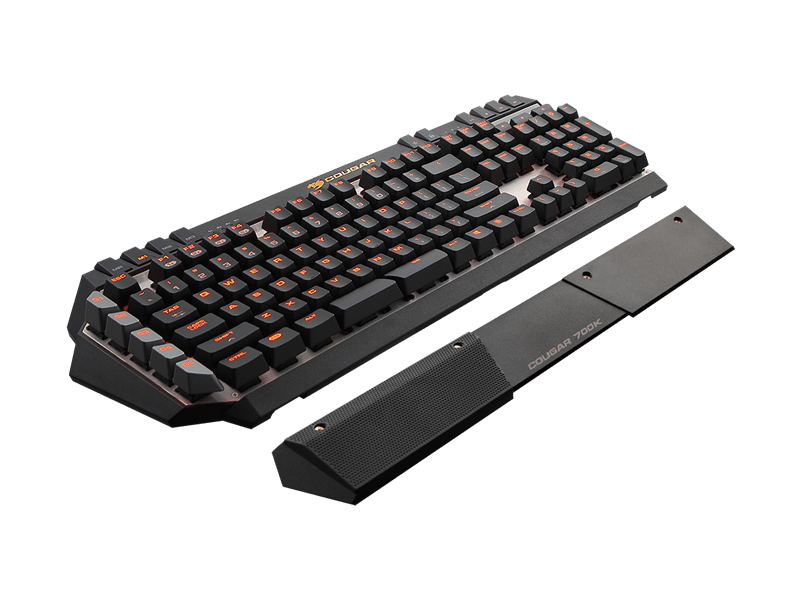 The Cougar 700K is a premium aluminium mechanical keyboard, with flashy orange backlighting, a long list of features and even an international design award. We were impressed by the Cougar 700M mouse, so will its keyboard counterpart receive the same high grade? Find out in our full review.

The Cougar 700K comes packed in a rather nice box, with a big photo of the keyboard on the front with the backlighting and wrist rest shown prominently.

The back includes a nice range of information, breaking down the many features and specifications of the keyboard.

One side has a panel which shows which variant you’ve got; our review unit comes with Cherry MX Red switches. 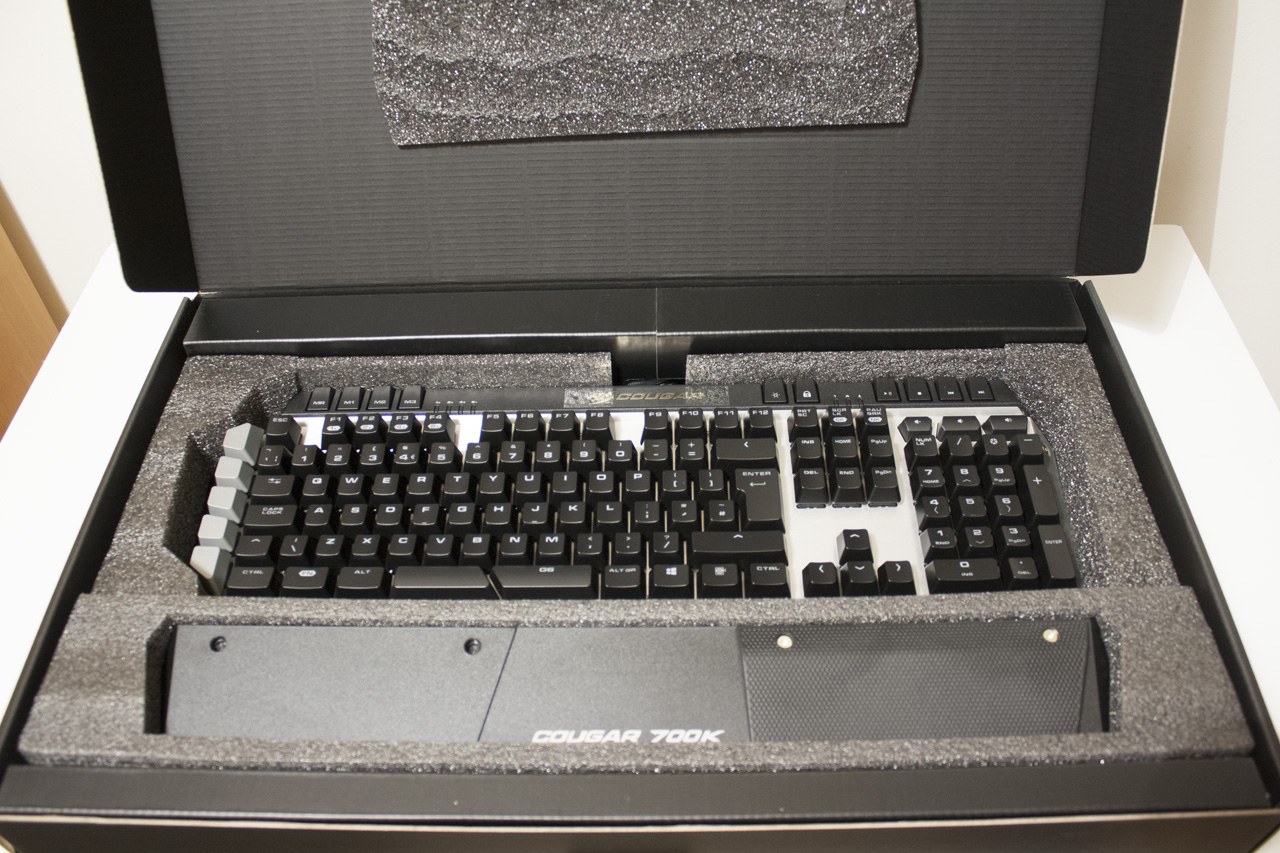 Inside, the keyboard is very well packed indeed, with loads of foam padding keeping everything in tip-top condition. The wrist rest is packed into its own compartment, with the cable, literature and other items packed below the keyboard. 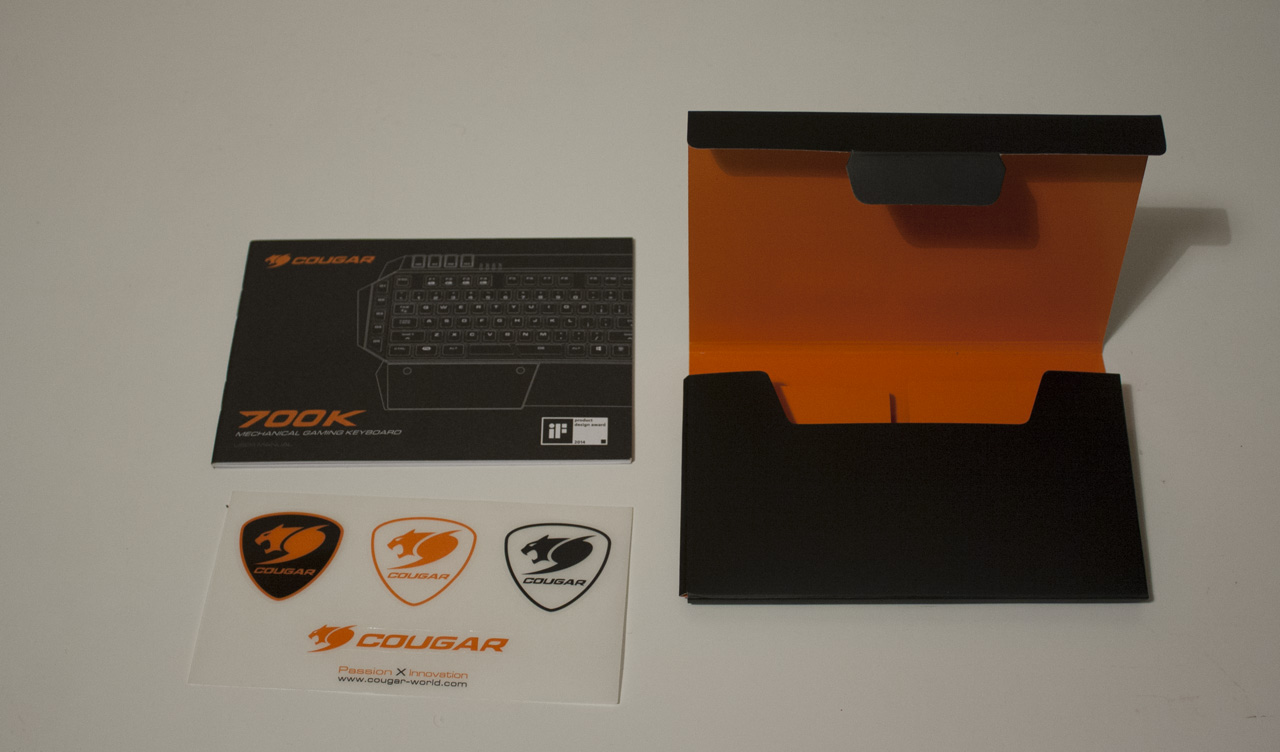 As well as the keyboard and wrist rest, you’ll pick up a sticker pack and an instruction / feature manual. Onwards to the keyboard itself!

The Cougar 700K is an impressive-looking keyboard even with its LEDs off, with a similar aluminium and plastic design to the Corsair K series of mechanical keyboards. The brushed metal backing has a cool effect on the keys, making them look almost as if they are floating.

The Cougar 700K has an expansive layout, incorporating a standard ISO or ANSI full-format layout and a range of added keys. There are some deviations from a standard keyboard, including a split space bar and a Function key in the place of the left Windows key. Beyond this, additional functions get their own keys on the periphery of the keyboard. In order to fit all of these keys without making the keyboard massive, the first and second rows of the keyboard are much closer together than you would normally see. 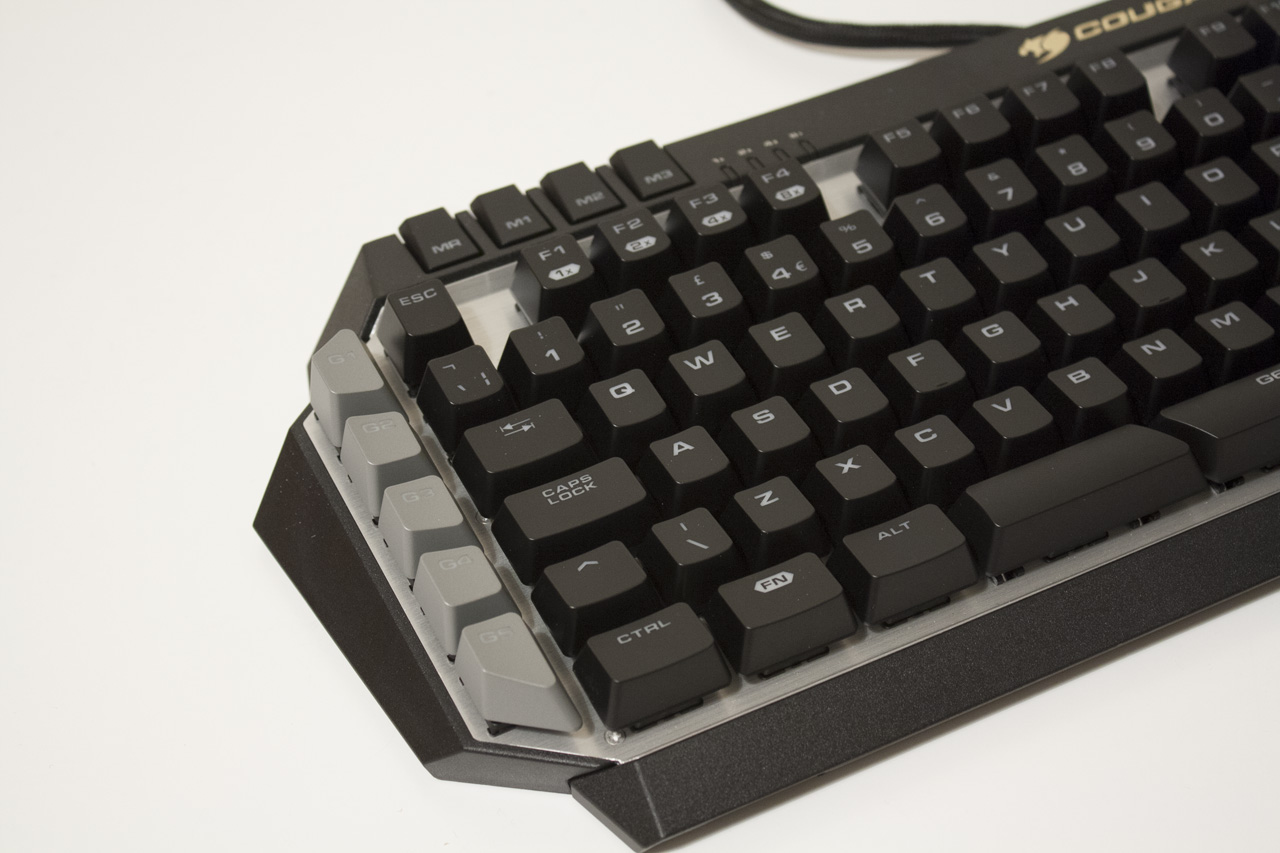 The left side of the keyboard is dominated by six grey macro keys. These are programmed in software, or by using the ‘macro record’ button above Escape. The macro keys can be a bit slippery, and cannot be easily removed. Next to the macro record button, we have three profiles which retain their own backlighting controls and button assignments. Finally, we have the repeat rate setting indicator, which goes from 1x to 8x. 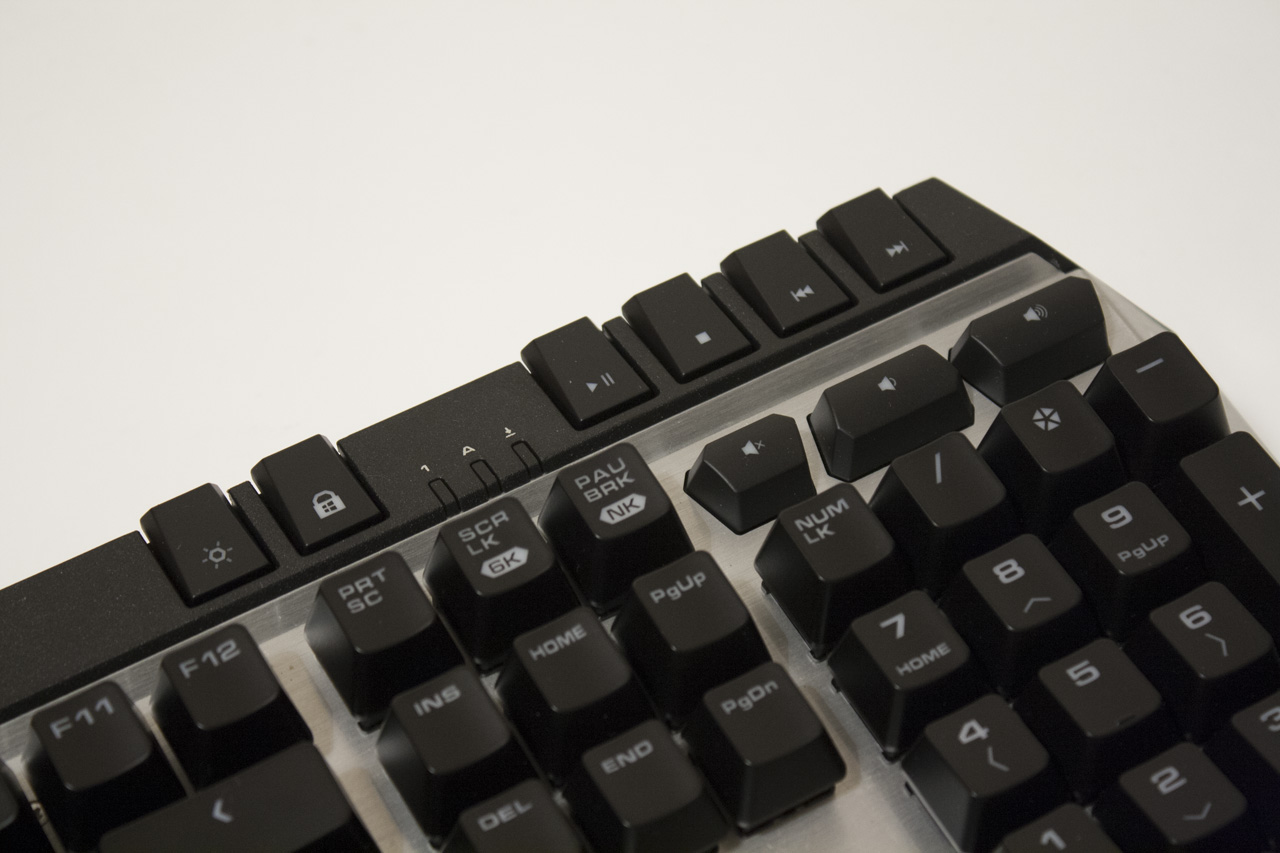 The upper right of the keyboard houses additional keys. Backlighting is controlled by the sun symbol key above F12; next to this is a key to disable the Windows key for gaming with a lock symbol. Moving right, we then have the three lock indicators (caps, scroll and number). Finally, we have four media keys along the top row, and three volume controls below this. The volume controls use rubber domes instead of mechanical switches, and require immense force to actuate. 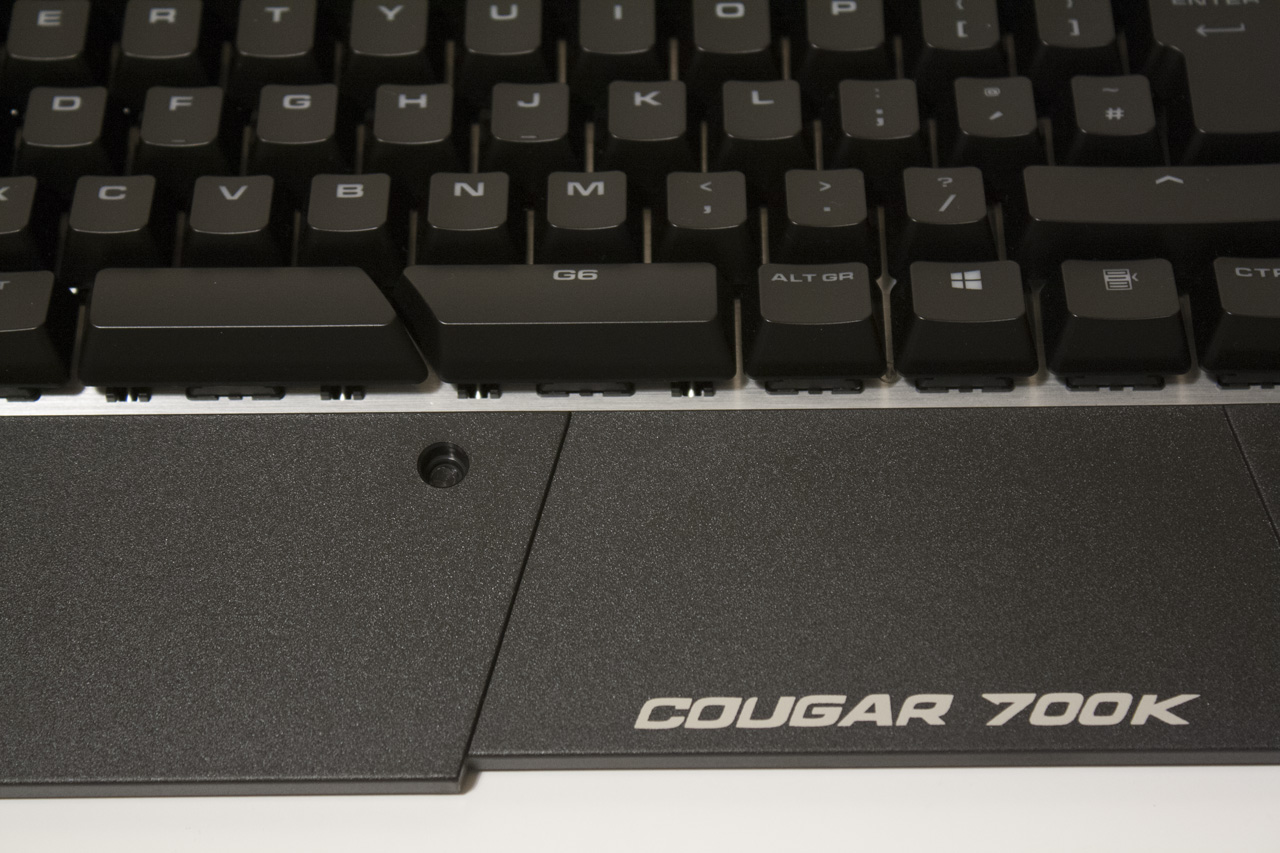 One unusual layout choice is the split space bar, which forms a space bar with the left side and an additional macro key on the other side. The right hand side can be programmed to act as another space bar if that’s preferable. 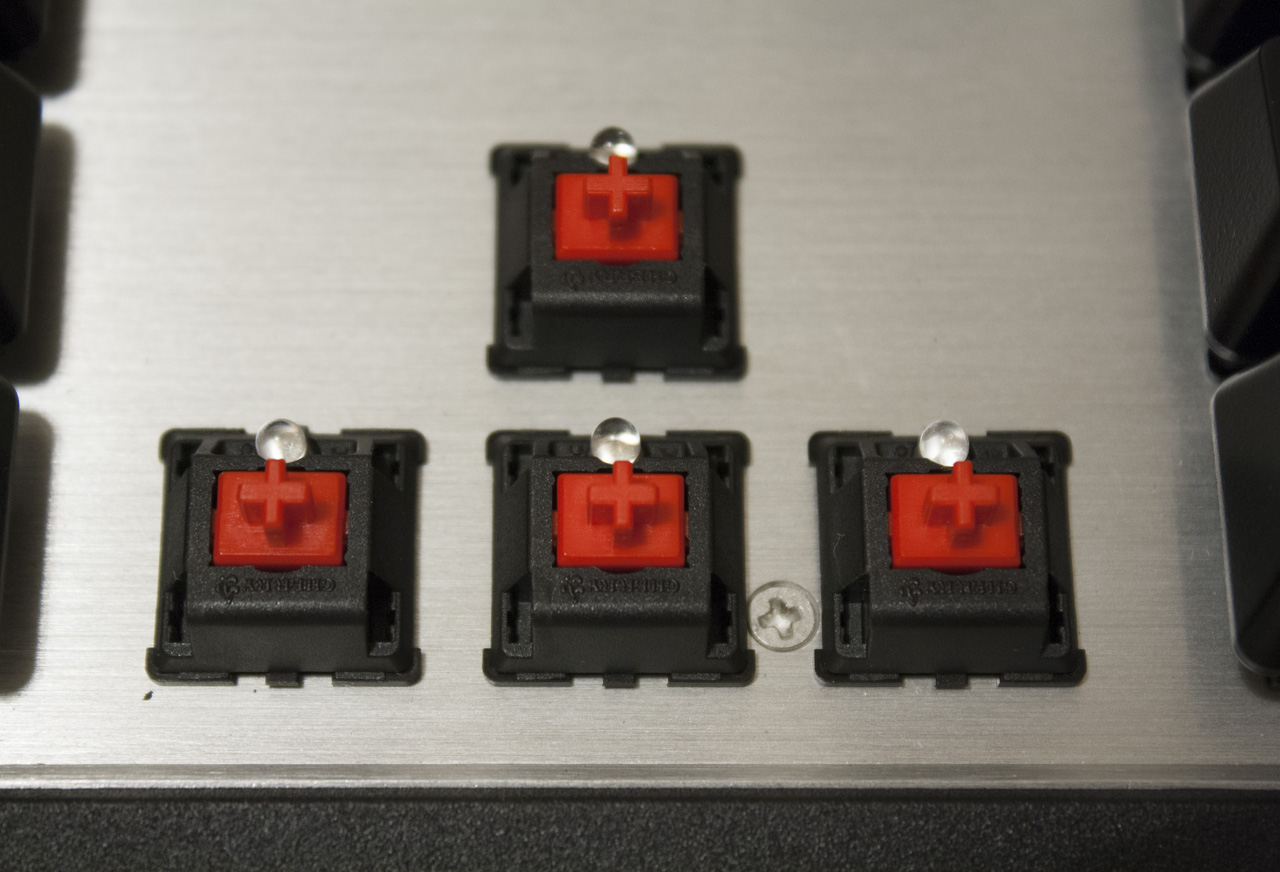 As mentioned earlier, this review unit comes with Cherry MX Red switches; Brown and Blue switches are also available. You can see the red switch housing that gives it that name and the LEDs found on each key. The switches are set within an aluminium frame. 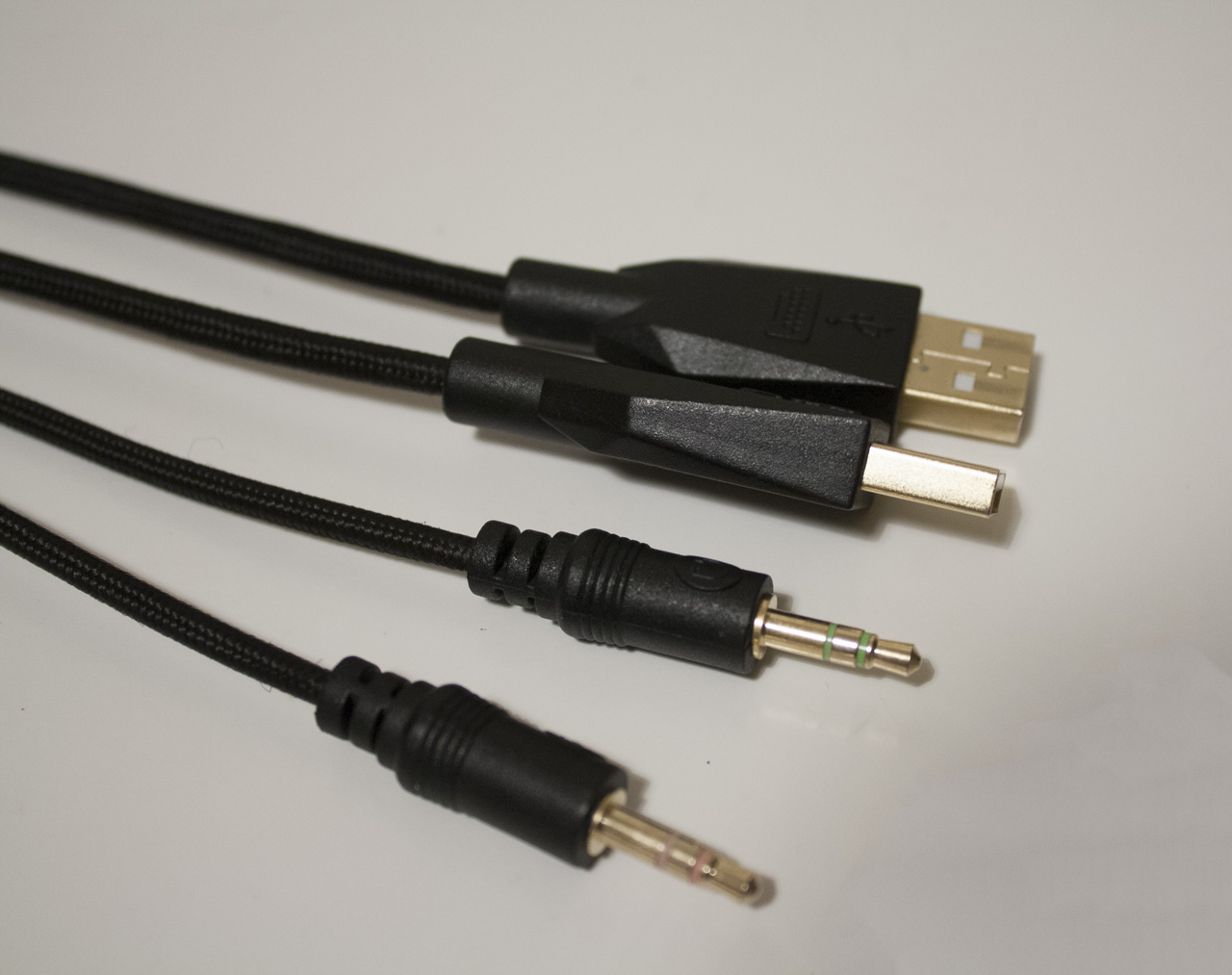 The keyboard requires one USB to operate, but the multi-tailed cable also includes a second USB and a pair of 3.5mm stereo plugs. These allow the keyboard’s passthrough ports to operate. 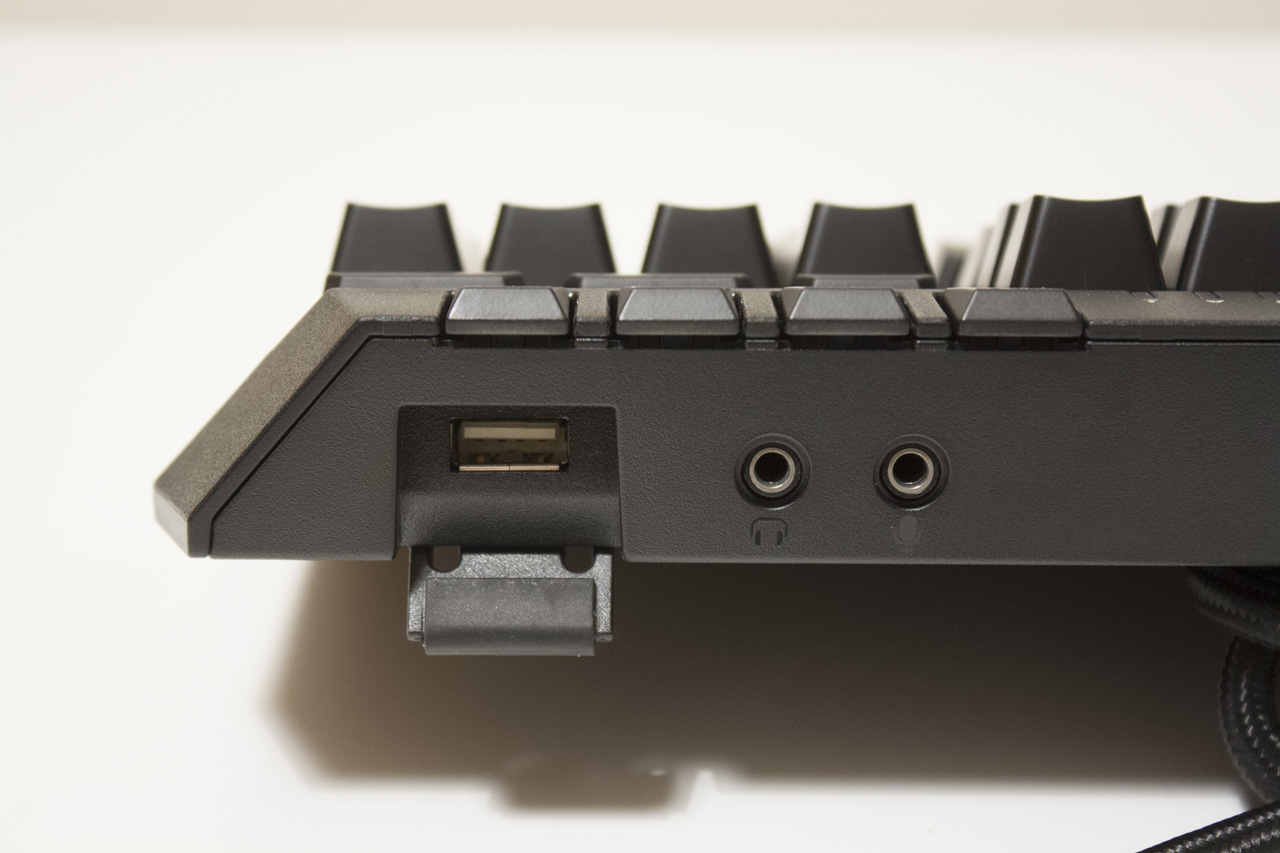 The passthrough ports are on the back right side of the keyboard, with the USB hiding within the resting place for the rubber feet and the two audio ports to the right. The rubber feet are of a good size, but at their maximum extension they don’t feel angled enough. 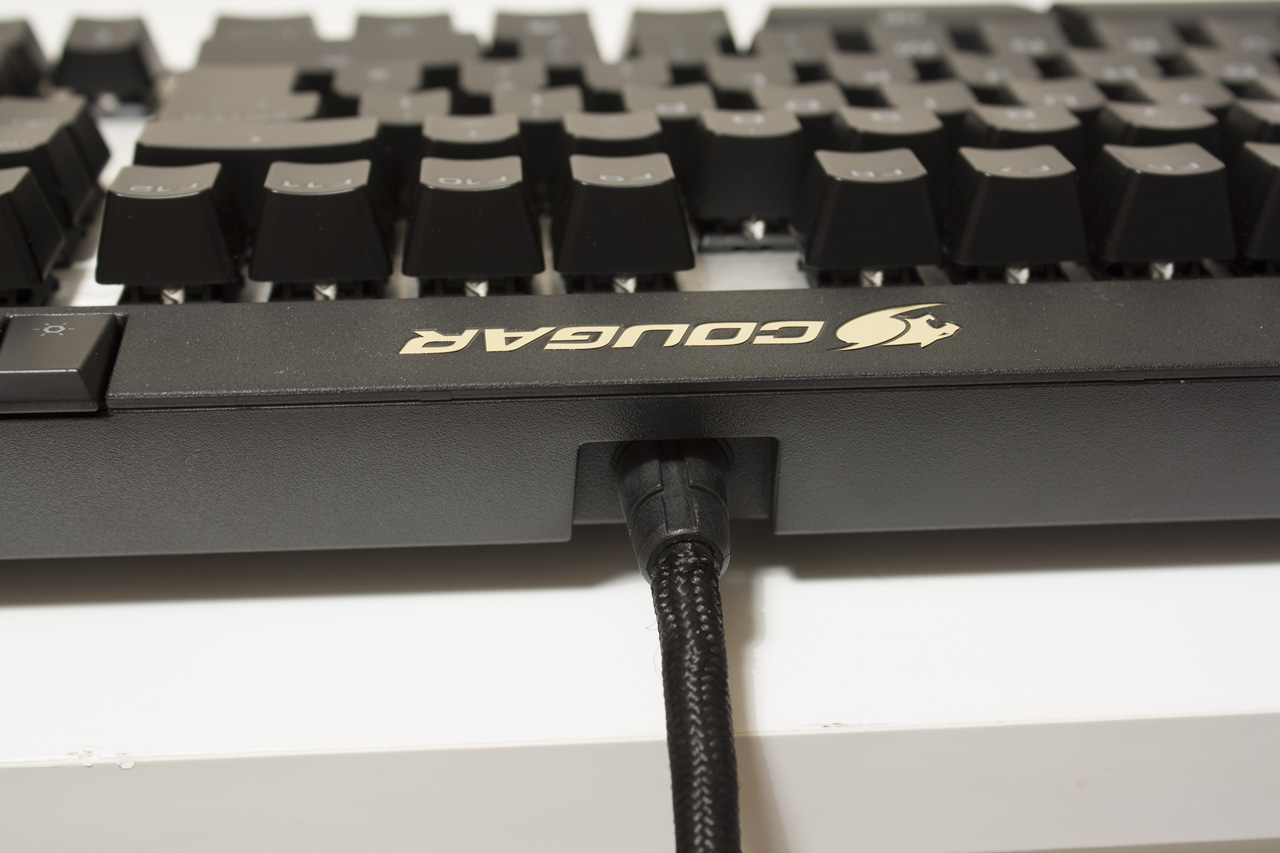 The USB cable is reinforced as it joins the body of the keyboard, just below the golden Cougar logo.

I used the Cougar 700K as my primary keyboard for a period of about three weeks. This included a lot of writing, some Photoshop work, and a fair amount of games as well. Games I played in this time included Borderlands: The Pre-Sequel, Counter-Strike: Global Offensive, Call of Duty: Advanced Warfare and Dragon Age: Inquisition.

The red switches of the Cougar 700K feel right at home in FPS games, where their light weight and lack of tactile feedback make them a little better at double-tapping and actuating quickly. The switches felt well-mounted in the board, and the few layout changes I mentioned in the earlier sections didn’t affect the keyboard for gaming.

The macro system worked as described, allowing me to record a 30-second series of butt slams* in Borderlands and then replay it with a single key press. This wasn’t particularly useful, but I was impressed with the speed at which I could record macros and start using them immediately.

*Butt slams are an amusingly named attack where you jump into the air, then press the crouch button to return to the ground with force. If an enemy lies beneath you, they take damage and can be stunned as well. 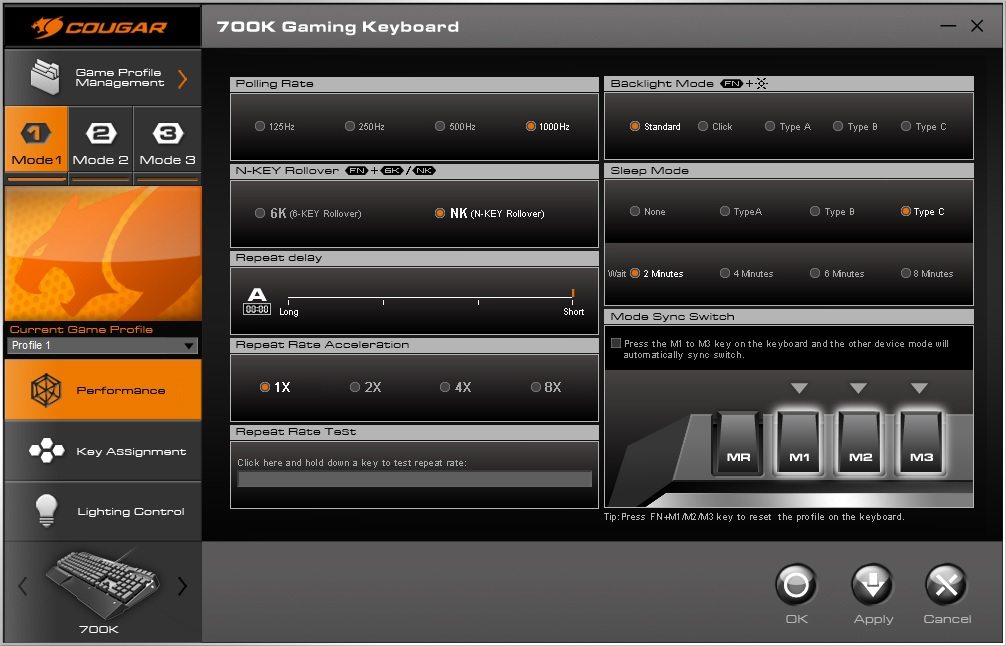 For more advanced customisation, I turned to the Cougar UIX software. The Cougar UIX system software is as full-featured as the keyboard itself, granting access to backlighting controls, key functions and performance options. Each key can be individually lit or extinguished, allowing you to create custom layouts to suit different games. Unfortunately, there is no method to automatically switch layouts when certain programs are launched. I used this to create a layout for Counter-Strike, which illuminated each common key and left the rest unlit. This custom backlighting made it a little easier to find keys in low lighting. 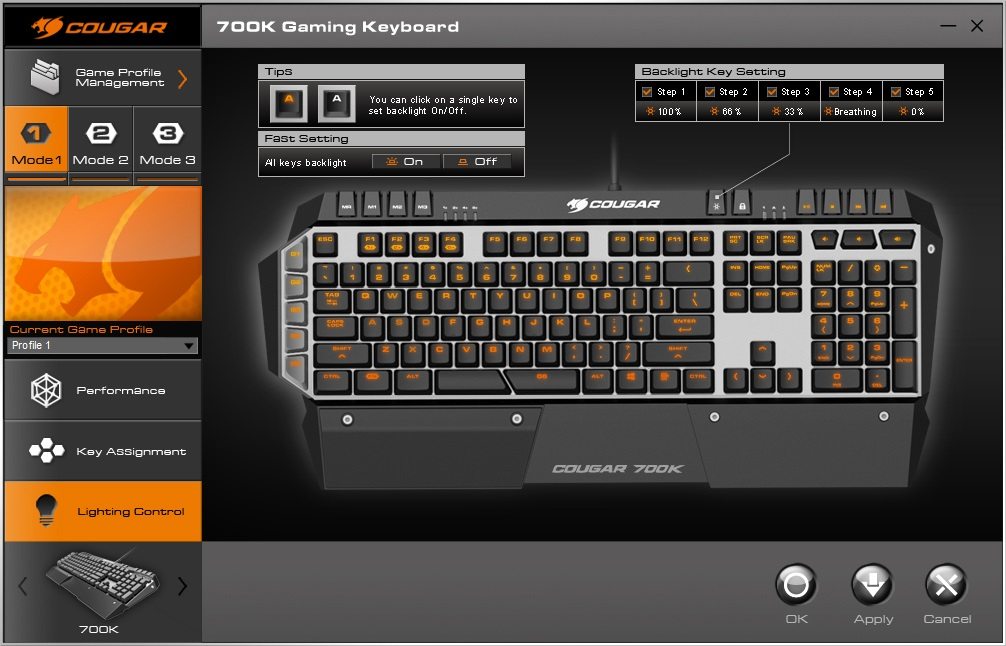 While I found the macro keys useful, sometimes users prefer to remove them from the keyboard altogether to prevent them from being accidentally pressed. This doesn’t seem to be possible on the 700K, although I didn’t try removing them at full force for fear of breaking the keyboard. Still, they are far enough away and an unusual shape, so it’s unlikely that you’d press them accidentally in the first place.

Overall, the Cougar 700K was an excellent gaming keyboard, providing a wide range of features without forgetting about the fundamentals: good switches in a sensible layout.

When writing, I first I found the split spacebar to be quite difficult to use – my fingers naturally hit right between the two keys instead of on either one. Within a few hours though, I had adjusted my finger stance and began pressing the spacebar with my right thumb, which allowed me to hit is quickly and consistently.

The function key that replaces the left Windows key was also the cause of some aggravation. In order to re-program the key to become Left Windows once again, you have to plug in another keyboard and press its Left Windows key. I also found that you can’t place the Function key anywhere else on the keyboard if you restore Left Windows. Both issues are caused by the Cougar software, which requires you to re-assign keys by pressing keys on your keyboard instead of selecting options from a list. Left Windows doesn’t exist on the keyboard so you can’t press it, while Function doesn’t send a keycode to the computer when pressed by itself. This issue has been reported, and hopefully will be fixed in an update.

These minor hurdles cleared, I found the Cougar 700K an excellent keyboard for typing. The Cherry MX Red switches on my review unit provided light resistance, making writing quite comfortable. Blue and Brown switches, which provide more tactile and aural feedback, are also available. The strong (but adjustable) orange backlighting was also an asset, allowing me to write accurately in dark conditions.

The first time I left the keyboard alone for a few minutes I thought I had broken it, as LEDs starting flashing around everywhere. This was actually the keyboard’s sleep mode, which can be configured to produce vertical sweeps, horizontal sweeps or a pseudo-random pattern. Unfortunately the UIX software doesn’t yet allow custom sleep modes to be written.

Media controls are a helpful inclusion on any keyboard, and I like Cougar’s approach by creating new keys instead of remapping existing ones. The play/pause/skip buttons work well, but the volume buttons aren’t well implemented. They use rubber domes which require immense force to actuate; it took me some time to realise that they even worked at all. Thankfully, I have a volume knob for my desktop within easy reach, so I don’t need to use these keys often.

The final part of the 700K was its wrist rest, which I found quite comfortable. Normally I prefer to keep the extra space on my desk, but for a long night of writing I found the rest kept my wrists in much better condition.

Overall – an excellent typing keyboard, with a few minor quirks balanced by a lot of added features. If you are picking up a 700K primarily for typing, your preference is paramount but I’d recommend Brown or Blue switches for their added feedback.

The Cougar 700K is a brilliant keyboard, replete with features and incredibly well built. While some design decisions won’t appeal to everyone and the software could use some improvement, Cougar have crafted a top-notch keyboard that will find fans among gamers and writers alike.

Earlier this year we took a look at the Tesoro Lobera mechanical gaming keyboard, which impressed us with...

This weekend I joined a dozen or so fellow tech bloggers for something rather out of the ordinary – an...